It is axiomatic that the purpose of attorney discipline is public protection. But what does that really mean? Two recent cases from the Review Dept., one published (Smithwick) one unpublished (Missud) illuminate the certainties and the uncertainties of chasing the public protection chimera.

Flipping the truism around, we start with the ridiculous before moving to the sublime.

Missud: Trudging Through the Muck 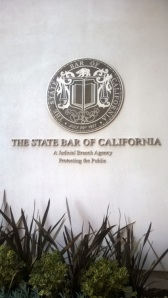 The first principle, Public Protection, written in stone. It gets less certain from this point on.

Mr. Missud was admitted to the State Bar in 2002.  He will almost certainly be departing in 2015.  The Review Dept.’s decision recommends his disbarment for “egregious misconduct during his disciplinary proceeding and in connection with several frivolous lawsuits he filed from 2005 through 2011.”  The frivolous lawsuits stemmed from Mr. Missud purchase of a home in Nevada and his subsequent dispute with the builder of the home.  He was found in contempt in Nevada state court and declared a vexatious litigant in Federal Court.

Representing himself in State Bar Court, Mr. Missud litigated his own discipline case in his unique style, in my 25 years of paying close attention to discipline, perhaps the most unique, although very much in the mould of cases like Lebbos v. State Bar, or In the Matter of Dixon (Review Dept. 1999) 4 Cal, State Bar Ct. Rptr. 23 (1999 WL 562767).  The famous quote from Lebbos sets the tone:

Petitioner’s pattern of serious, recurrent misconduct is a factor in aggravation… Further, unrestrained personal abuse and disruptive behavior characterized petitioner’s conduct during the State Bar proceedings. Failure to cooperate with the State Bar during disciplinary proceedings itself may support severe discipline. It is evident that petitioner has no appreciation that her method of practicing law is totally at odds with the professional standards of this state. Disbarment is thus necessary to protect the public, preserve confidence in the profession, and maintain high professional standards.

Accordingly, we need not examine the fine points of whether counsel has the right to refer to a judge as “swine” and “asshole” when speaking to court personnel in the course of their duties…*

A small sample of Mr.  Missud’s work product will suffice:

· “Don’t bother filing anything with C.J. Cantil-Sakauye. She’ll just put it in the ‘circular file’ because her job is to rubber stamp everything the Member-run Bar does, which primarily include$ furthering Bar Member$’ financial predation of a potential 38 Million ¢alifornians.”
· The “Bar rigged the D&O to conceal evidence that the judiciary, Bar, and Bar Member$ control a racketeering ring whereby they target the public for financial predation.”
· “Missud filed well in excess of just 8 $uit$ exposing judge$ turned felon$. You see ‘judicial immunity’ corrupts absolutely and turns judicial officers into racketeer$.”
· “setting up judge$ is my specialty”; “It’$ not about the money, it’$ now about judge$’ pri$on time.”

This are simple cases, if not easy cases for the judges and discipline prosecutors who have wade hip deep to get to the result.

Smithwick is not a simple case, which is why its a published case.

First, the procedural complexity.  Mr. Smithwick was one of the unlucky lawyers who entered into disciplinary stipulations with the Office of Chief Trial Counsel (OCTC) during the backlog reduction project in late 2011, only to have that State Bar Court approved recommendation returned by the California Supreme Court.

All agreed at that time that no actual suspension time was necessary to protect the public. And the reasons why seem straightforward.

Mr. Smithwick had been a lawyer with unblemished record over 30 years until he became involved with a mortgage assistance scheme (My US Legal) in 2009, through the good (?) offices of his law school classmate, Whaley, a resigned lawyer.  He thought he might be able to litigate cases against lenders for distressed homeowners if he had the resources that the non-attorney operated My Legal promised him.  After six to eight months he realized such resources were not going to be available.  Without being aware of it, he split fees with US Auditors in 12 cases, did nt provide legal services of any value to a client, failed to return unearned fees and did not notify the State Bar that he was employing Whaley (although Whaley worked for US Auditors).   Mr. Smithwick had ended the relationship before OCTC became involved and he was remorseful.  Although the parties stipulated that his conduct harmed a client,  the Review Dept.,  found very little factual support in the record to support that aggravating circumstance.

I should have said that all agreed but the California Supreme Court.  In June 2012 it sent the Smithwick case back to the State Bar Court along with a number of others, and instructed the State Bar to re-evaluate the recommended discipline “in light of applicable discipline standards.”   One bitten, twice shy OCTC  took that position that it could reopen the investigation, add charges of misconduct, conduct discovery, and present supplemental evidence on culpability and aggravation, without moving to withdraw from or modify the Stipulation. The Hearing Judge and the Review Dept., on interlocutory review, turned them down.  OCTC then moved to modify the Stipulation or be allowed to withdraw from the legal conclusions based on the limited stipulated facts.   The Hearing Judge denied that motion, too, but allowed the parties to present additional evidence bearing on aggravation and mitigation.

Second, the Substantive Complexity.   Accepting as it mission the Supreme Court’s directive to re-consider the matter in light of applicable discipline standards, the Review Dept.  But what exactly was the Supreme Court referring to?

The Review Dept. examined the Standards, the capital “S” kind found in the State Bar Rules of Procedure and it also examined comparable case-law on the most serious charge, fee splitting.  But it found that Standards  described a range from reproval to three years actual suspension, which was not helpful.   And, after looking at the comparable case, found that this wasn’t particularly either because  “the misconduct in those cases is far more serious than Smithwick’s.”   Finally, the Review Dept. examined a different set of cases,  than the Hearing Judge, the well elaborated case law on relationships with non-lawyers,  to come to the same place:  60  days actual suspension.

The Chimera of Greek Mythology

The Elusive Chimera of Certainty

Smithwick is a well supported decision.  But can you say that 60 days suspension is really necessary to protect the public?  As the Review Dept. pointed out, no actual suspension was agreed to by OCTC,  which then asked for two years actual suspension at trial, and then asked for six months on review.   Cases like Smithwick make this process look far more arbitrary than we want to it to be.  We don’t always know what public protection looks like; sometimes is it painfully obvious, as with Missud, but other times it just isn’t clear what kind of creature it is.   When you get to the hard cases,  you see why the “disciplinary standards” alluded to by the Supreme Court are to some degree, a myth.  We don’t really need them to deal with Mr. Missud;  they don’t help us much dealing with Mr. Smithwick.

* A personal aside:: despite being disbarred, Ms. Lebbos “represented” Stuart Hirsch in Hirsch v. Justices of the California Supreme Court (67 F.3d 708 (1995).)  At least she sat at counsel table and addressed Judge Wilson when he granted the motion to dismiss Mr. Hirsch’s frivolous lawsuit against me and my esteemed co-defendants..