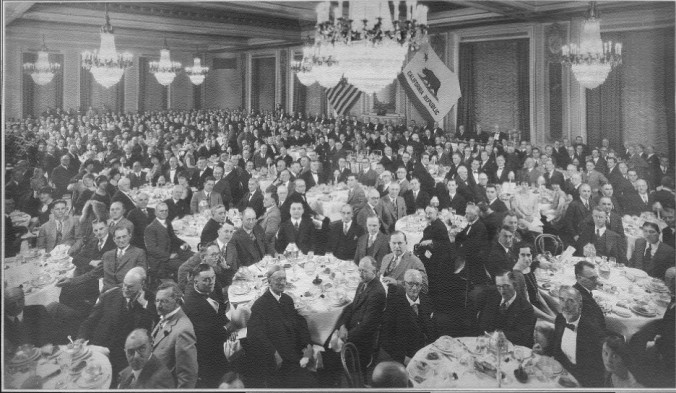 There are many things in life that you don’t appreciate until you no longer have them. The State Bar Annual Meeting may soon be one of those things.  Attendance at the Annual Meeting has apparently declined to the point where some are questioning whether to even keep putting it on.  In the old days, the Annual Meeting was a chance for many, if not most, California lawyers to get together, bond, and pat themselves on the back.  Somewhere in the bowels of the State Bar’s Library lie the bound volumes of the proceedings of these meeting, including a 1930’s State Bar President’s proud boast that the “discipline problem has almost been solved” or words to that effect.

We’ve come a long way and the State Bar Annual Meeting is showing its age at 89. Many important State Bar events still revolve it around it, such as the swearing in of the new board of trustees by the Chief Justice and many important committee meetings, like the Rules Revision Commission meeting I sat in on for a short time today.   But most California lawyers are there for the MCLE programs, which continue to be excellent, at least in my little patch of legal ethics, and maybe a chance to enjoy themselves.  This year’s annual meeting is in my hometown of San Diego and occupied most of one harborside hotel.  By contrast, the Annual Meeting I attended here in 1997  required much of the convention center and two large hotels.  For the first time this year, the MCLE programs were streamed over the internets, a concession to modernity that might hasten the Annual Meeting’s decline.

The President’s Luau was canceled this year under the new State Bar alcohol policy, adopted under pressure from the Assembly Judiciary Committee.  Best not to look too much like a trade association, like a bunch of cartoon conventioneers in funny hats gulping champagne or whatever.  Whether the State Bar is formally disunified or not, it is consciously purging itself of much that smacks of a bar association.

It is clear most lawyers don’t really understand what is going on.  I conducted an informal survey of a score or so of lawyers at the State Bar about the current controversy over disunification of the State Bar.  Only about half of the lawyers I talked to said that they were following it closely.  The vast majority, about 90%, supported continuing the unified bar.  Which is to be expected.

It was a beautiful day in San Diego today.  I tried to appreciate the Annual Meeting today for what it is still is, a chance to stroll around and run into old colleagues, friends and make some new acquaintances. A chance to enjoy some comradery and learn from each other.  There is still a place for that in our profession.